The Big Burn and The Medicine of Now 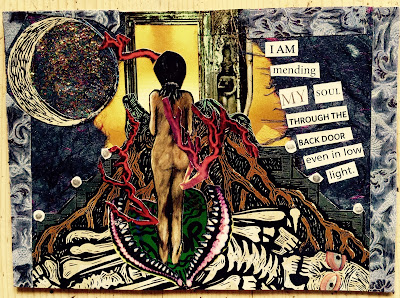 A lot has happened since mid-February. Your conclusion about this time being a big squeeze is spot on. For me, too. A big burning squeeze. My cat Ed died. The on-demand hot water heater died. No amount of fixing was going to revive it. It was an expensive replacement and two weeks without hot water and heat.

Neighbors offered showers. It’s been a mild winter. I even had a shamanic story about Ed and his love of the bathtub. So it seemed weirdly perfect to not be able to use the bathtub. And I was able reframe the no water thing as camping. In my house with every amenity. Except hot water and heat. Doable.

But what got me, what sent me down the slippery slope, around the bend, and kicked me in the ass was this: THE FREAKING FLU!

The first day: I refused to accept I was sick. But there was no nice reframe I could do about the flu. I was going down. No matter how many witchy brews I was drinking a day.

The second day: I went to bed. I secluded myself so I could be alone and safe. And invisible to the world. My body hurt; even the bottoms of my feet! My appetite disappeared. Going anywhere to take a shower seemed like the journey of a lifetime and I just didn’t have the energy for that kind of journey.

The third and fourth day: I slept. Hard. Ate chicken soup. Until I couldn’t stand the taste of it. Stayed hydrated. Until I thought I would float away. I moved slowly. I was sick but staying with myself. So far, so good. But I didn’t count on the blue spark of flu hitting my brain. That’s when things got ugly.

The fifth day to the tenth day: I entered the dark territory of Sarah’s Swamplandia. Deeper down than I’ve been in a long time.

My life flashed before my eyes. Back through the debris and stuff of my sixty-five years of living. My brain was on fire. Leaving me unable to think in full thoughts. Unable to talk in full sentences. Unable to process any of the life review I was going through in a way that made any sense. My usual ways of making intense feelings feel a whole lot less primal were not available to me.

But I was stuck in bed. With the flu. Full of anger, jealousy, short-fused snarkiness, and hatred. At myself. My life. The world. All of it. And there was a full on out of control wildfire happening in my head. My inner sanctum, so right at first, got smaller and smaller, as the burn got hotter and hotter. I wanted out. But my body didn’t have the energy to outrun my brain.

All I could do was just be in it. Even if it sucked. And it did. I kept reminding myself I was in it. That I was doing the best I could do. Without Ed. Without hot water. And that, honestly, trying to process any of it, as it was happening, was futile.

That’s when the burn in my head died down to a controlled burn. When I could finally see clearly where I was. Down deep in the darkest territory of me. A place I’ve spent a lifetime dancing around the edge of and hoping would just go away. Magically. Because that’s what I wanted.

I imagined a great big mama, holding me close to her, as she rocked me and patted me on the back. Cooing softly to me that things were going to be alright. I began to see the review of my life in a different light. I saw how my fiery inconsolability was my protection during my childhood. I saw how it had informed my life. I saw how it still does. And I saw it without the onslaught of judgements, comparisons, pathologizing, and sad stories.

I remembered two things I’d read before my flu days. One from Nadine Burke Harris, who wrote The Deepest Well: Healing the Long-Term Effects of Childhood Adversity. She says the tiny body really remembers the severity and stubbornness of the emotional pain we experience when we’re little. And it is good at holding onto the emotional pain and stuffing it down.

The other from Richard Rohr, who wrote The Naked Now, Learning to See as the Mystics See. He suggests wisdom is precisely the freedom to be truly present to what is right in front of you. That presence lets us know how to see clearly. That it is the one thing necessary for wisdom. That wisdom is the presence to see and know the ten thousand things in a new way.

And it is hard to do. Because it requires doing three things at the same time: Keep your heart open, your mind clear without resistance and divisiveness to what is happening and your body not somewhere else.

So, my burning squeeze, as unpleasant as it was, revealed to me how my life has unfolded in amazing ways. How its been a zig zag meander-y path where everyday magic occurs and brings me to my knees. In laughter and tears. That what I’ve judged to be a mistake, a wrong turn, a failure isn’t. That what I’ve pathologized as my PROBLEM is not a problem. It is the path. Leading me to right here. Doing what I do. Being who I am.